In line with many other towns and villages in the Borders, Smailholm now has a 20 mph speed limit in the centre of the village. And we also now have a "buffer" speed limit of 40 mph from beyond the double bends at the west end of the village to the centre.

The village hall has recently had the driveway resurfaced, so there are no more potholes, making it safe for pedestrians and vehicles.

The work was funded largely by a grant from The Roxburgh Federation of Village Halls, arranged by Heather Batsch of The Bridge, and by a donation of materials from Tarmac, which runs the nearby Craighouse quarry, arranged by Graham Kerr. Our thanks go to both of these supporters, and our main contractor, J. D. Kerr of Selkirk.

We also have two tarmac disabled parking spaces, and a tarmac walkway up to the hall, making it easier for both wheelchair users and those with wheeled walking frames. 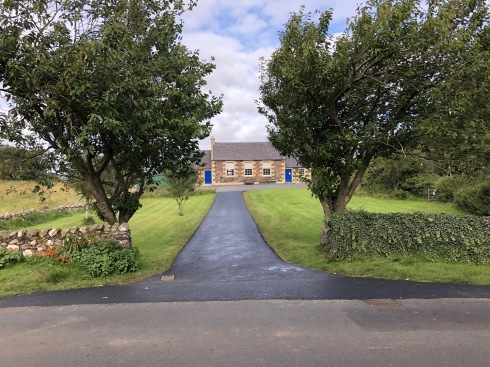 Kelso Country Churches Minister is Stephen Manners, and they have a website which you can visit here

There are no services in churches at the moment due to the coronavirus, but details of online services can be found on their website.

The Border Reivers in Cross Stitch

Some of you will know that Smailholm Stitchers created two panels of the Great Tapestry of Scotland, the Border Reivers and the Modern Kilt (see Village Ventures).  Our group of twelve included one of the few men involved in the tapestry.  Derrick Jowett’s special  talent  is cross stitch and when we’d finished the tapestry, Derrick had the inspired thought that he could recreate the Border Reivers in cross stitch, with a view to it being a present for his wife initially but ultimately for it to hang on the wall in the village hall, a memento of the village’s involvement with the Great Tapestry.

Derrick was fortunate that another of our group, Sally Scott Aiton, is the owner of a very prestigious cross stitch company, Cobweb Designs (https://www.cobweb-needlework.com) .  Sally  supplies the National Trust, Historic Scotland and other very famous historic buildings abroad,  such as Versailles in France and the Alhambra and the Prada in Spain, so she was perfectly placed, and – more importantly – willing to use her design skills to translate our Border Reiver panel into a cross stitch chart. Derrick made an excellent start to the project, demonstrating his usual high standard, but ill health forced him to accept that finishing it would be a challenge too far.  So he asked the tapestry group if they would finish the work, and without hesitation everyone said yes!

Cross stitch skills in Smailholm Stitchers were varied, from the very experienced to no experience at all.   However, enough people were in the former category and those who weren’t confined themselves to some of the simpler areas of the work, but everyone from the original tapestry group did a bit.  With Sally project managing it, the panel was completed in April 2018 and framed ready to hang in the village hall, where Derrick had decided it should go. It’s on a smaller scale, the cross stitch version is about 16” square and  the original panel three feet square,  but the replica is extremely authentic in appearance.

This all seemed to call for some sort of a celebration!  Completion coincided with Derrick’s birthday and we’re always up for a party.  So on 29th April 2018, we hung the picture on the hall wall, and, in collusion with Derrick's wife Marjorie,  brought him up  “to see the finished work”.  A bit suspicious at the number of cars outside when he arrived, the ensuing birthday tea (sandwiches with the crusts cut off, scones and homemade jam,lots of lovely cakes)  was a complete surprise!  Attendance from Smailholm Stitchers and Derrick’s friends in the village made for a lovely afternoon.  We’re grateful to Derrick for his wonderful idea.  Sadly, he died a few months later, but we are very happy to know that from  his inspiration, the Border Reivers will still be hanging in the village hall a hundred years from now!