The Great Tapestry of Scotland 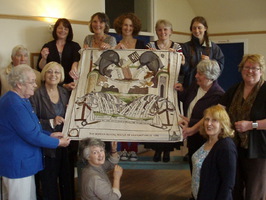 The Great Tapestry of Scotland -

This is the story of Smailholm's involvement in the Great Tapestry of Scotland. The tapestry was first shown to the public in the Scottish Parliament in September 2013 and we are delighted that its pernament home is in Galashiels in the new custom built Exhibition Centre.

Apart from stitching two panels in the Tapestry, we were also responsible for creating the shepherd in the new Welcome Panel, now on display in the entrance hall in Gala.  This project, which began before the covid lockdown, didn't work out quite as expected.  Five groups from around the Borders had a charcter each, and the original plan was for the artist, Andrew Crummy, to draw the content of the boxes around the outside, and for the stitching work to move around the Borders to encourage maximum participation.  Instead, it was all done locally, and the help of Smailholm artists (Fiona Morris, Fiona Brown, David Warren, Linda and Robyn Kinsman Blake) was invaluable in creating the images from ideas agreed by the wider project group.  If you go to see the tapestry, do take some time to look at the content of the little squares, you'll find yet another reference to Smailholm Tower, and a Smailholm pansy!

The first book about the tapestry, The Great Tapestry of Scotland The Making of a Masterpiece, by Susan Mansfield and Alistair Moffat, was published in September 2013 to coincide with the tapestry's opening.  It covers about forty of the panels, with very good coverage of the Smailholm panels, and is published by Berlinn at a cost of £9.99.  It is available  from good bookshops or on line.

In November 2015 a further book was published containing pictures of all the panels, the history they tell and the groups who stitched them.  This is also published by Berlinn and is widely available in bookshops and on line.

The Story of Scotland, by Alan Burnett, is a children's book, illustrated with pictures from the tapestry - many adults have also reported that it's a very good read!

And now, in September 2021 as the tapestry opens to the public,  we have a new book, "Sharing Yarns", collated by the lead stitcher Dorie Wilkie from stories sent in by stitching groups ....... including ours!  It's available from the Exhibition Centre shop for £14.

More details can about the tapestry, including exhibition dates, can be found at The Great Tapestry of Scotland website https://www.liveborders.org.uk/culture/the-great-tapestry-of-scotland/

The Scottish Diaspora Tapestry, one panel of which was also stitched in Smailholm, has been touring widely in Europe and is heading for North America.  You can find more details about it at on the diaspora website.

The Great Tapestry of Scotland is a community arts project which tells the history of Scotland from prehistoric times until the restoration of the Scottish Parliament in 1999.  There are 160+ panels, most of which are one metre square. It is believed to be the largest public arts project in Scotland as well as the biggest tapestry in the world.

Smailholm Stitchers worked on two panels of the tapestry.  We received the first one in June 2012 and started by making a trip to St Mary's Cathedral in Edinburgh to see the Prestonpans Tapestry, an inspiring work with the same artist and lead stitcher.  That gave us a much better idea about how stitches could be used. The level of skill required was different for different areas of the panel, and we were grateful for two members of our group of twelve who had considerable skill and experience.  The rest of us, mainly experienced in different forms of sewing,  gained in confidence and skill as we went on and were delighted with the finished panels, which were both completed on time.

Panels arrived with outlines drawn on linen, and with a colour scheme but quite a lot of room for creativity, so having an artist on the team was a considerable bonus.   Our first panel was on the Border Reivers and Kinmont Willie 1596. It tells the story of the rescue of Willie Armstrong from Carlisle Castle, where he had been imprisoned, having been unsportingly detained on a Day of Truce!   It was very easy to get quite involved in something so relevant to our area, and we learned a good deal of history as we went along.  Note the moon in the top right corner, linking Kinmont Willie to his most famous descendant, Neil Armstrong.

More details about the Border Reivers Panel and how it developed are contained in the document at the foot of the page.

Just before Christmas 2012 we were asked if we were interested in taking on a second panel.  Despite initial concerns, we are delighted that we did.  We were allocated the panel on the Modern Kilt Invented Lochaber 1723,  The kilt as we know it today is believed to have been invented by an English Quaker, Thomas Rawlinson, when the ancient belted plaids proved difficult garments for the workers at the ironworks in Invergarry.  Tartan purists will know that because formalised tartans did not come into being until later in the 18th century, we could simply make ours up!

The top boxes on our panel reflect some recent research from Glasgow University proving that bright colours were used in 18th century tartan as a result of  quite exotic imported dyes being readily available in Scotland, and distributed round the country by boat.   And, to the right of the lower line of text, we sneaked in a Smailholm Pansy, which has no relevance to dye sources at all!

You can read more about the development of this panel in the document below.