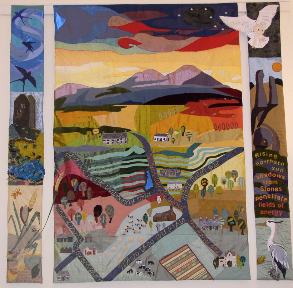 In 2004, with the help of Community Artist Barbara Middleton, the community came together to produce a large wall hanging.  We met in the hall on a Wednesday evening, and it's probably fair to say that for some time we struggled to see how the individual pieces of work we were producing were going to come together to one cohesive textile picture, but with Barbara's help they did, producing the lovely piece of work which hangs on the hall wall today.  Several of the people working on the project, male and female, in the age range 8 to 70, had no previous involvement with textiles and had never used a sewing machine, but over the year which it took before the work was complete many people learned new skills and techniques.

Some people added personal details to the wallhanging in the form of their own houses, and there are also some non-textile features in the form of small pieces of pottery..  The wallhanging hangs at the east end of the hall and represents themes from the village and surrounding countryside.